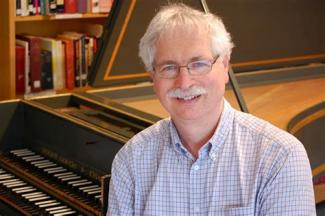 ​Arthur Haas is one of the most sought after performers and teachers of Baroque music in the United States today. He received the top prize in the Paris International Harpsichord Competition in 1975 and then stayed in France for a number of years as an active member of the growing European early music scene.  While in Paris, he joined the Five Centuries Ensemble, a group acclaimed for its performances and recordings of  Baroque and contemporary music.  He is a member of the Aulos Ensemble, one of America’s premier period instrument ensembles whose recordings of Bach, Vivaldi, Telemann, and Rameau have won critical acclaim in the press, as well as Empire Viols, and Aula Harmoniæ.   He has recorded harpsichord music of Jean-Henry D’Anglebert, Forqueray, Purcell and his contemporaries, Elisabeth Jacquet de La Guerre, François Couperin, and most recently the three books of Pièces de Clavecin of J.Ph. Rameau.  Annual summer workshop and festival appearances include the International Baroque Institute at Longy, and the Amherst Early Music Festival, where he served as artistic director of the Baroque Academy from 2002-2011.  Mr. Haas is professor of harpsichord and early music at Stony Brook University where he leads the award winning Stony Brook Baroque Players, and is also on the faculty of Juilliard’s historical performance program.  In Fall 2012, he joined the distinguished faculty of the Yale School of Music.

* Arthur Haas will be on faculty for week 1 of the 2023 Amherst Early Music Festival.