L’homme armé is a mid-fifteenth century secular melody that was employed as cantus firmus in over 40 mass settings by almost as many composers. Only the tenor and one strophe of text survive of the original chanson. Much speculation exists about the reference and purpose of the original text, and the specific function of the many polyphonic settings, placing the origin in connection with the Order of the Golden Fleece, the conquest of the Byzantine city of Constantinople by the Ottoman Turks, the call for a crusade against them, or the archangel Michael. Aside from the violent, often brutal, and war-torn realities of 15th century politics and religion that might have originally driven the creation of these compositions, the contrapuntal L’homme armé mass settings are fascinating to study from a compositional and notational point of view. Interesting features are used, including retrograde quotation, augmentation, and mensuration canons. The first generation of composers creating mass setting using L’homme armé as cantus firmus includes DuFay, Ockeghem, and Regis, to be followed by other late 15th century greats such as Josquin, Busnoys, Obrecht, Compere, Brumel, La Rue, and others.
Similar to our previous exploration of De tous biens plaine in Session 10, Session 11 looks at “musical borrowing”, or the way in which a popular melody was used and reused, quoted and reworked in the late 15th and early 16th centuries. Pitch: 440, Open to all instrumentalists and singers. 4 class sessions are $100. Sign up here! 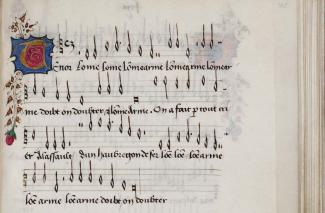