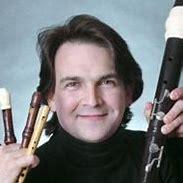 Aldo Abreu has taken the recorder and its repertoire to many prestigious venues throughout the United States, Europe, New Zealand, Australia, and his native Venezuela. Since winning First Prize at the 1992 Concert Artists Guild Competition, Mr. Abreu has been heard in recitals at the Ambassador Auditorium in Los Angeles, the Gardner Museum in Boston, Northwestern University's Pick-Staiger Hall in Chicago, Spivey Concert Hall in Atlanta, the Metropolitan Museum of Arts and Weill Recital Hall at Carnegie Hall in New York. Laureate of the Premio Flauto Dolce Competition(Germany) and the Concours Musica Antiqua (Belgium), Mr. Abreu has been featured at the Spoleto Festivals in the United States and Italy, the OK Mozart Festival, the Boston Early Music Festival, the Recorder 2000 Festival in Armidale, Australia, and the Festival Music Society in Indianapolis.

Mr. Abreu is a frequent guest of the American Bach Soloists in California, both on stage and in their recordings for the Koch International label. Mr. Abreu has been soloist with orchestras throughout the United States, including the Handel and Haydn Society, the West Shore Symphony, the Illinois Chamber Symphony, the Savannah Symphony, the Billings Symphony, and the Dubuque Symphony Orchestra. He has also performed extensively as a soloist and chamber musician with both modern and historical instruments, in concert for the Cambridge Society for Early Music, Maverick Concerts in Woodstock, NY, the "Distinguished Visitors in the Arts" series in Corpus Cristi, TX, and the Performing Arts Series in Utica, NY.

Mr. Abreu frequently performs contemporary works written for him. Among them, The Kid from Venezuela by composer Pete Rose, Echoes and Shadows by Christopher Cook, Concerto for Recorder and Orchestra, comissioned from Ricardo Lorenz by Concert Artists Guild, and most recently, Concerto for Recorders and Orchestra by Lawrence Weiner. Mr. Abreu has also explored the rich but rarely heard music by Latin American composers of the Baroque and Contemporary periods. His artistic interpretation of traditional recorder music is evident in his 2005 CD realease on the Centaur label of concerti by Vivaldi, Telemann and Boismortier. An allmusic.com reviewer hailed "Venezuelan-born recorder player Aldo Abreu executes the rapid passagework in the Vivace finale of Telemann's Concerto in A Minor with aplomb."

Born in Caracas, Aldo Abreu holds the Performer's and Teacher's diplomas from the Royal Conservatory in the Hague, and a Master's degree from Indiana University in Bloomington. His teachers have included Ricardo Kanji, Michael Barker and Scott Martin Kosofsky. Mr. Abreu is a member of the faculties of the New England Conservatory, Boston University, The Boston Conservatory, and the Amherst Early Music Festival and Institute.

*Aldo Abreu will be on faculty for Week 1 of the 2022 Amherst Early Music Festival.