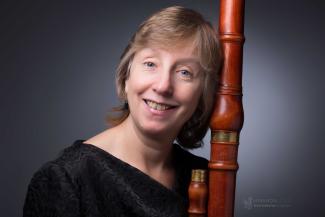 Marilyn Boenau has performed and recorded with most of the leading Baroque orchestras in North America, including Philharmonia Baroque Orchestra, the Handel & Haydn Society, Portland Baroque Orchestra, Apollo’s Fire, Tafelmusik, and Opera Lafayette. In Europe she has worked with The Harp Consort, Collegium Vocale, and Freiburg Baroque. In May 2005 she performed at the Handel Festspiele in Göttingen, Germany. She is the bassoon soloist with Music Pacifica on the Dorian CD La Notte, which includes several Vivaldi chamber concertos. Her playing has been called “breathtaking” by the Portland Oregonian. Marilyn holds a Soloist”s Diploma from the Schola Cantorum in Basel, Switzerland, where she studied recorder, shawm, curtal, and bassoon with Michel Piguet and Walter Stiftner. She has performed Renaissance music with the Boston Shawm and Sackbut Ensemble, Blue Heron Renaissance Choir, and the Folger Consort. In addition to her performing career, Marilyn is the executive director of Amherst Early Music, Inc.