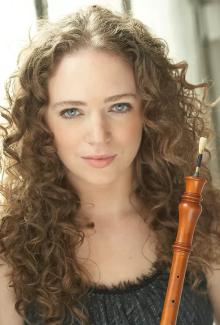 Priscilla Herreid is a musician in the ancient and living tradition of woodwind doubling. Her formative years studying recorder at Philadelphia's Settlement Music School led her to the High School for Creative and Performing Arts, where she began playing the oboe. The daughter of musicians, Priscilla was immersed in the sounds of Oswald von Wolkenstein, J.S. Bach, Paul Hindemith, Chick Corea – a childhood soundtrack that led organically to a love of and fascination with early music, and the desire to make that into her living.

She now plays period oboes, recorders, and a multitude of renaissance wind instruments with some of the finest ensembles in the US and abroad. A longtime member of Piffaro, the Renaissance Band, Priscilla is now their Artistic Director Designate, beginning her leadership of the preeminent ensemble next season. With Piffaro, she has appeared at major festivals and series throughout the US, Europe, and South America. Priscilla was part of the onstage band for the Shakespeare on Broadway productions of Twelfth Night and Richard III, starring Mark Rylance. Other appearances include The City Musick, Tenet Vocal Artists, The Gabrieli Consort, Hesperus, Ex Umbris, The Waverly Consort, The Dark Horse Consort, Bishop's Band, and The Rose Ensemble. Equally at home in the 18th century, Priscilla is principal oboist of Boston Baroque, Tempesta di Mare, and New York Baroque Inc., performs regularly with The Handel + Haydn Society and Trinity Baroque Orchestra, and has appeared with Philharmonia Baroque, the Boston Early Music Festival Orchestra, Venice Baroque, Portland Baroque, The Sebastians, Les Delices, American Bach Soloists, and Mr. Jones and the Engines of Destruction. She is a founding member of the quartet New World Recorders.

Priscilla is former director of the Early Music Ensemble at Temple University, where she introduced music majors to new (old) instruments and aspects of performance practice. She is also frequently brought in to coach recorder, renaissance wind band, and baroque ensembles at Yale University and The Juilliard School. She has taught baroque oboe at the Oberlin Baroque Performance Institute and renaissance winds and recorder at the Madison and Amherst Early Music Festivals.