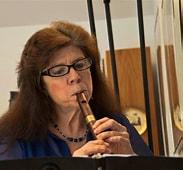 The Times reviewed her performances as “technically precise and musically expressive”.  Recordings include a CD as flute and recorder soloist with the American Boy Choir (American Songfest), as well as soundtrack for the television show Blues Clues.  New projects this fall include concerts with St. Michael’s Baroque.

Ms. Booth teaches in New York City, Greenwich, CT,  directs the Princeton Recorder Academy, and has taught and played each summer at the Amherst Early Music Festival and numerous other summer festivals such as Pinewoods Early Music Week. Mideast Workshop, and the Long Island Recorder Festival.   Conducting experience includes The Recorder Orchestra of New York (RONY) from 2004 to 2008.  Ms. Booth is in demand nationally as a workshop director for the American Recorder Society and the National Flute Association and has recently accepted an appointment on the faculty of Marymount Manhattan College.

Conversations a recording of 17th and 18th century music for recorder and flute with harpsichord, organ, viola da gamba, cello, and bassoon was released in September of 2012.

**Deborah Booth will be on faculty for Week 2 of the 2022 Amherst Early Music Festival.