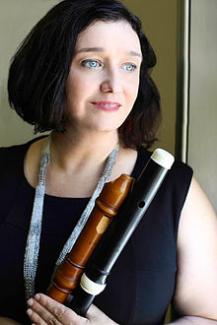 Flutist, recorder player and Artistic Director and founder of Tempesta di Mare Gwyn Roberts has been a featured soloist with the Chamber Orchestra of Philadelphia, the Portland Baroque Orchestra, Recitar Cantando of Tokyo, and at the Kennedy Center in Washington DC. American Record Guide has called her "a world-class virtuoso", and the Washington Post remarked, "with her sparkling technique and sensitive attention to musicality, she infused the music with operatic drama." Her recording of Veracini Recorder Sonatas earned a five star rating from BBC Music Magazine. As co-director of Philadelphia Baroque Orchestra Tempesta di Mare, she leads the ensemble in frequent performances from Oregon to Prague, records for Chandos (UK), and appears frequently on NPR's Performance Today. Recordings include, Deutsche Grammaphon, Dorian, Sony Classics, Vox, PolyGram, PGM, Newport Classics, and Radio France. Ms. Roberts is Director of Early Music at the University of Pennsylvania and is on faculty at Peabody Conservatory. She studied recorder with Marion Verbruggen and Leo Meilink and baroque flute with Marten Root at Utrecht Conservatory in the Netherlands.

*Gwyn Roberts will be on faculty for week 1 of the 2023 Amherst Early Music Festival.