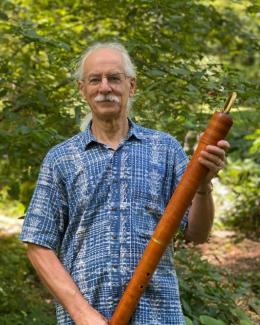 Douglas Young has attended many early music workshops, studying with most of the top recorder and early wind teachers from the US and Europe. Doug plays all sizes of recorders, cornetto, shawms, and curtals.  He performs with Rossignol, and sang in the Renaissance a cappela ensemble, Fortuna, for 15 years.  Doug played cornetto in the early brass quintet, The Carolina Waits, which performed in the Carolinas and Virginia.  Doug shares a passion with Pat for the music and notation of the late 14th through early 16th centuries.  This passion arose early in his recorder career when he acquired a copy of Thomas Morley’s “Plaine and Easie Introduction to Practicall Musicke” and used it as his tutor.  He has taught a few introductory level notation classes at Amherst Early Music workshops and leads the weekly notations drop-ins during the summer festival.

Doug’s other passion, outside early music, is old-time Southern string band music. An accomplished banjo player, he has performed with several bands and competed in numerous old time fiddler conventions.