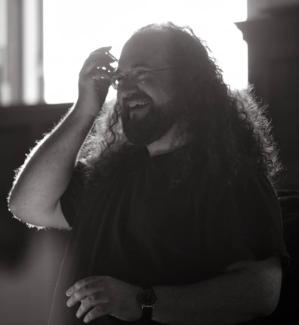 Temmo Korisheli is an active performer in many musical styles, especially medieval, Renaissance, and Baroque. Recent early-music engagements have included concerts with Ensemble Ciaramella in Los Angeles, Victoria, and New York, and with the Texas Early Music Project in Austin. He has been on staff with the Amherst Early Music Festival of New England for the past 22 years, where he has collaborated with many luminaries of the early-music world; he also serves as bursar of the Festival. Mr. Korisheli has appeared as soloist with ensembles such as the Los Angeles Baroque Orchestra, the New York Collegium under Andrew Parrott, and regional oratorio societies; as a guest artist with several university early music programs around the state and beyond; and sang for many years in the UCSB Cappella Cordina. He is a founding member of the UCSB Middle East Ensemble, sings frequently in the Opera Santa Barbara Chorus, and plays clawhammer banjo, and, this December, celebrates 20 seasons of spreading Christmas cheer with the Santa Barbara Holiday Carollers. Mr. Korisheli is assistant music director at All Saints’-by-the-Sea Episcopal Church in Montecito. He holds the MA and PhD (ABD) degrees in historical musicology from UCSB, where he studied with Alejandro Planchart and William Prizer and where he presently supervises the Music Library.

Temmo Korisheli will be on faculty for week 2 of the 2023 Amherst Early Music Festival.