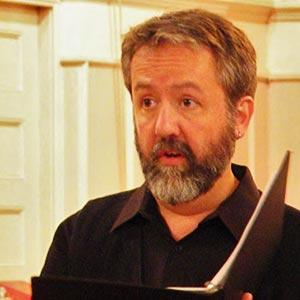 Bass-baritone Paul Guttry enjoys the variety of opera, oratorio, and a specialization in early music. A former member of Chanticleer, Paul has performed throughout the USA and internationally with Sequentia, the Boston Camerata, and New York's Ensemble for Early Music. In Boston he has appeared as soloist with Emmanuel Music, the Handel & Haydn Society, the Boston Early Music Festival, the Tanglewood Music Center, Cantata Singers, Boston Cecilia, Prism Opera, Intermezzo, Boston Revels, and Collage. This summer he sang the role of Osmin in the Connecticut Early Music Festival's production of Mozart's Die Entführung aus dem Serail and in the spring will appear as the Father in Britten's The Prodigal Son with Intermezzo. In addition to Blue Heron's discs, Paul can be heard on recordings of medieval music by Sequentia, Kurt Weill's Johnny Johnson and French airs de cour with the Boston Camerata, and music of Bach by Emmanuel Music.

*Paul Guttry will be on faculty for Week 1 of the 2022 Amherst Early Music Festival.