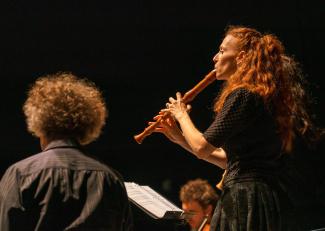 Daphna Mor (recorders, voice, ney) has performed throughout Europe and the United States as both a soloist and ensemble player. Mor’s “astonishing virtuosity” (Chicago Tribune) has been heard in solo recitals in the United States, Croatia, Germany and Switzerland. She appeared as a soloist at Tanglewood and the Met Museum with Apollo’s Fire Orchestra, as well as with the New York Collegium, the New York Early Music Ensemble, Little Orchestra Society at Carnegie Hall and more. As member of the orchestra, Mor performed with the New York Philharmonic, New York City Opera and Orchestra of St. Luke's. Mor was awarded First Prize in the Settimane Musicali di Lugano Solo Competition and the Boston Conservatory Concerto Competition, and has appeared in a duo with Joyce DiDonato on the singer's promotional tour for the album In War and Peace.

Devoted to new music, Mor has recorded on John Zorn's Tzadik label, and has performed the world premiere of David Bruce's Tears, Puffes, Jumps, and Galliard with the Metropolis Ensemble. She co-composed WAVES- for recorders, voice, cello and a beat boxer for Carolyn Dorfman Dance and performed it in summer 2017 in New York’s Summer Stage among other venues.

Mor has also performed in festivals and on stages worldwide with the band Pharaoh’s Daughter and Rachid Hailial’s ensemble “Layali al Andelus” . She can also be heard on Sting’s album If On A Winter’s Night for Deutsche Grammophon. Daphna is co-director, together with Nina Stern, of the ensemble East of the River ( www.eastoftherivermusic.com). Mor serves as the Music Director of Beineinu (www.beineinu.com) , a New York initiative dedicated to the modern cultivation of Jewish culture, and is a performer and teacher of liturgical music of the Jewish diaspora. She recently returned from India where she gave a master class of Piyutim- Liturgical jewish poetry- to the Jewish community in Mumbai, while learning new local indian ones.

Mor is a sought after visiting teacher in workshops and universities around the US. She also specializes and devoted to in Early Childhood Education. She leads programs for the Education Department of the Metropolitan Museum of Art.