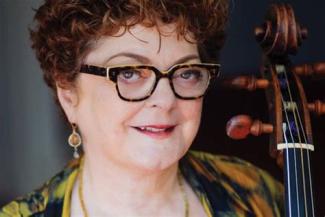 Phoebe Carrai, a native Bostonian, completed her post-graduate studies in Austria with Nikolaus Harnencourt, after studying with Lawrence Lesser and  receiving her B.M. and M.M. at New England Conservatory of Music. She became a member of Musica Antiqua Köln in 1982, making over 40 recordings for Deutsche Gramophone and touring the world.

Ms. Carrai’s teaching career in historical performance started at the Hillversum Conservatory in the Netherlands and spending 16 years on the faculty of The University of the Arts in Berlin, Germany. She is presently on the faculties of The Juilliard School and The Longy School of Music. She started “New Years Resolution Baroque Cello Bootcamp” 15 years ago and it is still one of her greatest joys each year! In the summers, when not at her favorite spot on Cape Cod, she can be found teaching at Amherst Early Music, Aria Camp, The Bach Cello Suites Workshop and at Juilliard sponsored courses in Montisi, Italy and Brugge, Belgium.

Along with her solo and chamber music concerts, she directs Harvard Baroque Chamber Orchestra and performs regularly with Philharmonia Baroque, The Arcadian Academy, Juilliard Baroque, The Boston Early Music Festival and the Göttingen Festival Orchestra.

Ms. Carrai has released recordings of the Bach Solo Cello Suites, a duo recording of Frederich August Kummer, and has now also released “Out of Italy” for Avie Records. She has also recorded for Decca, Deutsche Gramophone, Aetme, Telarc and BMG. She plays on an Italian cello from ca. 1690.

*Phoebe Carrai will be on faculty for week 1 of the 2023 Amherst Early Music Festival.