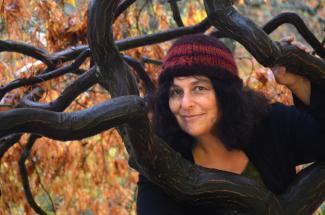 Multi-instrumentalist and occasional vocalist Shira Kammen has spent
well over half her life exploring the worlds of early and traditional
music. A member for many years of the early music Ensembles Alcatraz and
Project Ars Nova, and Medieval Strings, she has also worked with
Sequentia, Hesperion XX, the Boston Camerata, the Balkan group Kitka,
Anonymous IV, the King's Noyse, the Newberry and Folger Consorts, the
Oregon, California and San Francisco Shakespeare Festivals, and is the
founder of Class V Music, an ensemble dedicated to providing music on
river rafting trips. She has performed and taught in the United States,
Canada, Mexico, Europe, Israel, Morocco, Latvia, Russia and Japan, and
on the Colorado, Rogue, Green, Grande Ronde, East Carson and Klamath
Rivers.

Shira happily collaborated with singer/storyteller John Fleagle for
fifteen years, and performs now with several groups: a medieval
ensemble, Fortune's Wheel: a new music group, Ephemeros; an eclectic
ethnic band, Panacea, the early music ensembles Sitka Trio, Calextone,
Cançonier and In Bocca al Lupo; as well as frequent collaborations with
performers such as storyteller/harpist Patrick Ball, medieval music
expert Margriet Tindemans, singer Anne Azema, fiddler Kaila Flexer, and
in many theatrical and dance productions, including the California
Revels and The American Repertory Ballet Company. She has worked with
students in many different settings, among them teaching summer music
workshops in the woods, coaching students of early music in such schools
as Yale University, Case Western, the University of Oregon at Eugene,
and working at specialized seminars at the Fondazione Cini in Venice,
Italy and the Scuola Cantorum Basiliensis in Switzerland.

She has played on several television and movie soundtracks, including
'O', a modern high school-setting of Othello and ‘’The Nativity Story’,
and has accompanied many diverse artists in recording projects, among
them singers Azam Ali and Joanna Newsom. Some of her original music can
be heard in an independent film about fans of the work of JRR Tolkien.
The strangest place Shira has played is in the elephant pit of the
Jerusalem Zoo. She has recently taken courses in Taiko drumming and
voiceover acting.

**Shira Kammen will be on faculty for Week 2 of the 2023 Amherst Early Music Festival.