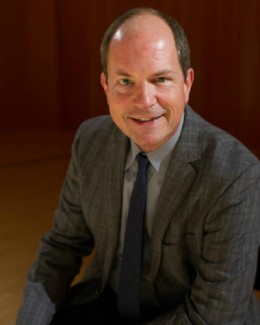 Regarded for over two decades as one of the world’s finest countertenors, Drew Minter grew up as a boy treble in the Washington Cathedral Choir of Men and Boys. He continued his education at Indiana University and the Musik Hochschule of Vienna. Minter has appeared in leading roles with the opera companies of Brussels, Toulouse, Boston, Washington, Santa Fe, Wolf Trap, Glimmerglass, and Nice, among others. A recognized specialist in the works of Handel, he performed frequently at the Handel festivals of Göttingen, Halle, Karlsruhe, Maryland. He has sung with many of the world's leading baroque orchestras, including Les Arts Florissants, the Handel and Haydn Society, Philharmonia Baroque Orchestra, Freiburger Barockorchester, and as a guest at festivals such as Tanglewood, Ravinia, Regensburg, BAM's Next Wave, Edinburgh, Spoleto, and Boston Early Music; other orchestra credits include the Philadelphia Orchestra, the San Francisco Orchestra and the St. Paul Chamber Orchestra. Mr. Minter is a founding member of the Newberry Consort and sings and plays early harps regularly with TREFOIL, My Lord Chamberlain’s Consort, ARTEK, and the Folger Consort. Mr. Minter has made over 50 recordings on Harmonia Mundi, Decca/London, Newport Classics, Hungaroton and others. He appears in two films: as Tolomeo in Peter Sellars’s “Giulio Cesare,” and as the Devil in “In the Symphony of the World; a Portrait of Hildegard of Bingen.” He writes regularly for Opera News.

Drew Minter is also a lauded stage director. He began as director of the operas at the Göttingen Händel Festival for five years, directing period baroque productions. Since then he has directed productions in many styles for the Opéra de Marseilles, Caramoor, the Boston Early Music Festival, Lake George Opera, the Orchestra of St. Luke’s, Handel and Haydn, Boston’s Opera Aperta, the Manhattan School of Music, Mannes School of Music, Boston University’s Opera Institute, Amherst Early Music, the Folger Shakespeare Theatre, the Five Colleges in Northampton, Tempesta di Mare and Cleveland’s Apollo’s Fire. Since assuming artistic directorship of Boston Midsummer Opera in 2006, he has directed his own pastiches of scenes, The Marriages of Mozart and Tales of Offenbach as well as Peter Brook’s Tragedy of Carmen and Mozart’s Così fan tutte.

In addition to numerous workshops in the vocal and dramatic performance of baroque music, Mr. Minter teaches voice at Vassar College, where he also directs the Vassar Opera Workshop and conducts the Vassar Madrigal Singers. He has taught since 1989 at the Amherst Early Music Institute. He sings between thirty and fifty concerts each season with a variety of early music groups.