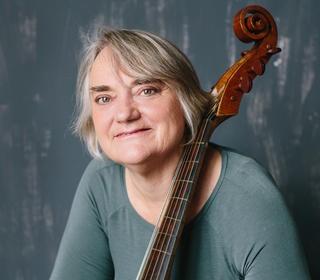 ​Sarah Cunningham began her viol studies in 1969 in Boston where as a young player she was described as "one of the most satisfying players of anything in the area." She then went on to work with Wieland Kuijken at the Royal Conservatory in The Hague. In 1981 she moved to London where she was active as a soloist and chamber musician and won world-wide recognition for her eloquent, expressive and communicative playing. She was a founder-member, with baroque violinist Monica Huggett, of the acclaimed Trio Sonnerie, with whom she made many recordings and toured on three continents.

In 1992 she was invited by flautist James Galway to collaborate on his recordings of Bach's chamber music for flute. Since then, in addition to two recordings for BMG Classics, she has performed with him in several highly successful American and European tours. As a soloist she has appeared at Festivals from Helsinki to London to Boston to Vancouver. Her CD of solo viol music, entitled Play this Passionate, on Virgin Classics, coincided with the re-release of her CD of music by Marin Marais on ASV. A second unaccompanied CD, Spirit of Gambo, was on the Swedish label, Seagull Records. The two solo recordings were later released as a double CD by Virgin/EMI under the title Play this passionate.

After moving to West Cork, Ireland, in 1999, Sarah Cunningham was in demand as a soloist and chamber musician throughout Ireland, appearing  on Lyric FM as artist of the week. She was founder in 2003 and Artistic Director
until 2008 of the highly acclaimed East Cork Early Music Festival. She held the professorship in viola da gamba at the Hochschule für Künste, Bremen from 1990-2000. After moving back to the Philadelphia area in 2009 she joined the Historical Performance department at the Juilliard School, teaching the viol to ever-increasing numbers of young musicians, as well as coaching chamber music and viol consorts.

*Sarah Cunningham will be on faculty for Week 1 of the 2023 Amherst Early Music Festival.