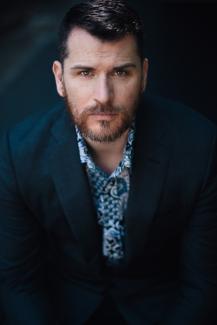 A native of Cape Town, South Africa, Leon Schelhase found himself resonating with Baroque music from an early age. His musical studies brought him to the harpsichord early on, and subsequently landed him in the United States where he has rapidly become sought after as both soloist and continuo performer. A recipient of the American Bach Soloists’ prestigious Goldberg Prize, Leon’s solo performances have been praised as “exquisite” and filled with “virtuosity” by the Boston Musical Intelligencer, and his continuo playing described as revealing “clean and clear lines… always distinct within the surrounding textures.” Having lived and studied in Boston, Leon has had the privileged of performing with Emmanuel Music, Ensemble Florilege, and the Gardener Museum Orchestra. His involvement with conductor-less string band A Far Cry, described by the Montpelier Times Argus as “matching [the soloists’] tasteful ornamenting with unusual sensitivity,” culminated in an appearance as guest artist on their first CD “Debut”. But Leon’s most notable musical collaboration in Boston has been with Cambridge Concentus, an ensemble specializing in the music of Bach, and of which he is a founding member. In 2009, famed conductor Joshua Rifkin directed the ensemble in an epoch-making performance of JS Bach’s St Matthew Passion on tour in Japan. Leon holds a BMus (Hons) from the University of Cape Town, and a Master’s Degree in Historical Performance from Boston University where he was a student of Peter Sykes. He currently resides in Philadelphia where his local and broader involvement in early music is evident with performances with his chamber ensemble, Old City Music, La Rocinante (Colombia), Ars Antiqua, Choral Arts Society of Philadelphia, the Philadelphia Bach Festival Orchestra and New York State Baroque, Pegasus Early Music (Rochester, NY) and continuo accompanist fellow at the Baroque Performance Institute, Oberlin, OH. He appeared as guest soloist with the American Bach Soloists, CA and served as Assistant Conductor in Handel’s TESEO at the Chicago Opera Theater. Leon joined the faculty of the Curtis Institute of Music in 2012.

**Leon Schelhase will be on faculty for Week 2 of the 2022 Amherst Early Music Festival.