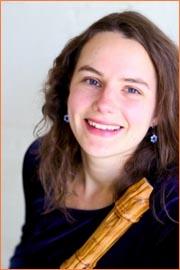 Annette Bauer, a native of Germany, holds a diploma in Medieval and Renaissance performance practice from the Schola Cantorum Basiliensis in Basel, Switzerland, where she specialized in recorder techniques with Conrad Steinmann (2001). Supported by a scholarship from the DAAD (German Academic Exchange Service), she pursued an MA in music from UC Santa Cruz in conjunction with her studies at the Ali Akbar College of Music, where she studied sarode under Maestro Ali Akbar Khan. As a recorder player, Annette regularly performs with medieval ensemble Cançonier, the Baroque group Les grâces, and the Farallon Recorder Quartet. She has appeared at the Santa Cruz Baroque and Carmel Bach Festivals, as well as with early music ensembles across the US, such as the California Bach Society, Catacoustic Consort, Chamber Music San Francisco, Istanpitta, Magnificat, and the Texas Early Music Project. Annette has served on the recorder and early notation faculty for several of the San Francisco Early Music Society summer workshops and the Amherst Early Music Festival. Certified in Orff Schulwerk, she teaches recorder pedagogy to music teachers at the San Francisco Orff Certification Course. Annette was selected for the 2009 recorder residency at Sitka Center for Art and Ecology in Oregon.

Annette’s musical passions include original notation sources in early music, and improvisation in modal music traditions, from the highly intricate and complex Indian ragas, to medieval modes, to the modal repertoire of European, Middle Eastern, and North African music traditions. She is the co-founder of Magic Carpet, a duo dedicated to the art of improvisation. Annette also plays Brazilian percussion with Maracatu Luta, and has studied Maracatu and other rhythms from the Brazilian Northeast with groups in Recife, Brazil, and at the annual California Brazil Camp.