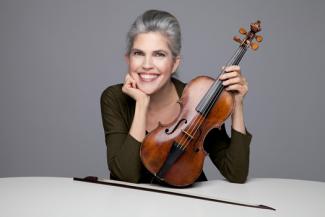 Ingrid Matthews is one of the premier baroque violinists of her generation. She won the Bodky International Early Music Competition in 1989, and served as Music Director of Seattle Baroque Orchestra from 1994-2013. She has performed extensively around the world as soloist, guest director and chamber musician with many of today's leading early music ensembles, and has won high critical acclaim for a discography ranging from the earliest Italian violin music through the Sonatas and Partitas of J.S. Bach. Matthews also plays jazz and swing styles, and is active as a visual artist.

*Ingrid Matthews will be on faculty for Week 1 of the 2023 Amherst Early Music Festival.