Canti B followed Harmonice Musices Odhecaton A as the second book in Petrucci’s three-volume series of collections of Franco-Flemish songs and instrumental works. AEM’s 2021 edition marked the 500th anniversary of the death of master composer Josquin des Prez, whose pieces appear in Canti B along with those of Obrecht, Japart, Compère, Brumel, and others. The collection includes fifty-one pieces for three to six parts, mostly untexted and mostly secular.

This AEM edition, (now second edition) was a pandemic project for music editor Daniel Stillman. World-renowned musicologist and Josquin scholar David Fallows served as general editor, and wrote a commentary for each piece, an introduction, and an appendix with “A Word on Accidentals” and his own versions of four pieces.

Several of the pieces have canons between two or more parts, and these appear alongside the pieces as puzzles that can be resolved by the players if they wish. As with all AEM editions, the book is designed with minimal page turns and beautifully legible scores. Parts for longer pieces are included in the volume Second edition. 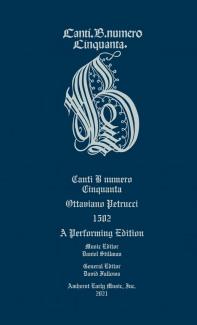